We all know about the importance of sleep, and we know we should be getting more of it. When you wake up exhausted, drag yourself to work or hit that afternoon slump, it's easy to assume that you simply aren't get enough snooze time. But, what about the quality of your sleep? Nocturnal teeth grinding can be sign of an underlying sleep disorder, which can not only lead to serious health implications but significantly affects one's quality of life. 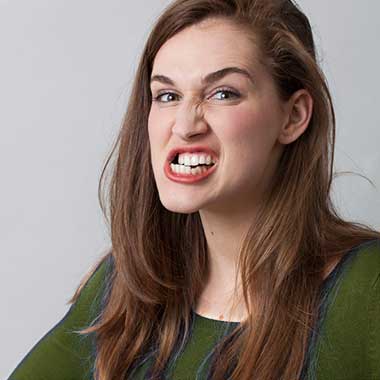 There is a growing body of research reporting that nocturnal teeth grinding (bruxism) rarely occurs in isolation. Recently, in an epidemiological study of sleep bruxism and risk factors in the general population, it was found that among the associated sleep symptoms—sleep apnoea was the highest risk factor for tooth grinding during sleep. So instead of "did I get my eight hours?" we should be asking ourselves, "how well did I sleep?" We tolerate feeling exhausted during the day, but it's actually not normal to feel tired or sleepy when you wake up.

Obstructive sleep apnoea (OSA) is a condition where the air passage in the throat becomes blocked during sleep and causes people to stop breathing. An estimated one million people in Australia have sleep apnoea. This number is expected to grow with increased obesity and the ageing population. Four percent of men and two percent of women are affected by sleep apnoea, the majority go undiagnosed.

As the brain approaches the deepest stages of sleep, the lower jaw drops back and the muscles of the airway fully relax. When the airway collapses like this, breathing can become compromised. This is where you get snoring, which is just the sound that's made when air is getting forced through a partially obstructed airway.

Once the brain senses that breathing is dangerously compromised, it gets out of the deepest stage of sleep to regain control of the jaw muscles and reopen the airway, and keep you alive and breathing. One of the ways the brain tries to reopen the airway in an unconscious state is by grinding and clenching the teeth.

These sleep apnoea cycles can occur from five to up to 70 times per hour while you sleep —preventing you from entering the deepest stages of sleep where the brain and body tissues can repair themselves from the wear and tear of the day.

Research shows that nearly 1 in 4 patients with OSA grind their teeth. Dr Subramanian, Professor at Baylor College of Medicine, explains that the relationship between obstructive sleep apnoea and sleep bruxism is usually related to an arousal response. The ending of an apnoeic event may be accompanied by a number of mouth phenomena, such as snoring, gasps, mumbles, and teeth grinding. Men typically have more severe sleep apnoea, and perhaps may have more arousal responses, which may explain the higher prevalence of teeth grinding in men. Besides, men characteristically tend to report more symptoms of sleep apnoea than women, such as snoring, loud grunting, and witnessed apnoeas.1

Other factors that might help explain the relationship between sleep apnoea and teeth grinding include anxiety and caffeine use. High levels of anxiety can lead to bruxism, and untreated sleep apnoea is known to cause mood disturbances including depression and anxiety. Daytime sleepiness from sleep apnoea may cause a person to ingest caffeine, and this has also been associated with a high risk of teeth grinding.1

Sleep apnoea can't usually be detected by doctors during routine office visits, but a screening from your dentist may help—so be sure to get screened at your next dental check-up for teeth grinding.

At Bite Dental we take the time during our examination appointments to complete a full orofacial assessment of the jaw joints, facial muscles, soft and hard tissues for any patterns of abnormality—including teeth grinding. Although nocturnal bruxing is a major indicator that you are struggling to keep your airway open at night and might be a sign of an underlying sleep disorder—this is not always the case, but it is definitely worthwhile having the conversation.