Implants to replace teeth—getting close to the real thing

Share the blog
Home Implants to replace teeth—getting close to the real thing
Implants to replace teeth—getting close to the real thing. You brush, you floss, you see your dentist for regular check-ups and cleaning—but even with our best efforts, there are still times when the inevitable happens and the tooth, or teeth, must come out. That's when we need to look at options for replacement.   Humanity has been dealing with tooth loss ever since we evolved them. One of the best-known historical examples is George Washington, the first president of the USA. Washington suffered from dental problems all his life, and eventually had to have the last of his teeth extracted. 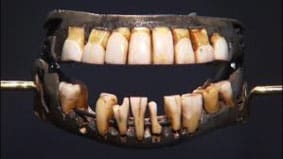 Although legend has it that the dentures he used to replace his teeth were carved from wood, this isn't true. Four sets of Washington's false teeth exist today, and researchers examining them found that their components included materials as varied as gold, lead, hippopotamus ivory, and human and animal teeth. Washington's false teeth were no joy: they were held in his mouth using springs and wires, caused no end of discomfort plus he claimed they distorted his appearance. Today's dentures have greatly improved over the contraptions George Washington was stuck with, but they still follow the same basic design (although we've managed to do away with the springs and wires). Fortunately for today's patients, modern dentistry has developed a new and better alternative called implants. Dental implants are a rising trend in reconstructive dentistry, allowing dentists to restore a natural appearance, with functional and long-lasting teeth. Implants and their advantagesDental implants come in two parts—the implant proper, which is a prosthetic tooth root implanted in the jaw, and the replacement tooth that sits on top of the implanted root. This process can replace anything from a single missing tooth, to the entire upper and lower complement of teeth. With the huge modern advances in materials and procedures patients are finding numerous advantages of going down the implant route such as:         So what about Stem Cells? - Fact or Fiction?For years, researchers have been investigating stem cells in an effort to grow teeth. Toward this end, endodontics professor Dr. Peter Murray and colleagues from the College of Dental Medicine at Nova Southeastern University (NSU) claim to have developed methods to control adult stem cell growth and generate "real" replacement teeth. The NSU researchers' approach is to extract stem cells from oral tissue, such as inside a tooth itself, or from bone marrow. After being harvested, the cells are mounted to a polymer scaffold in the shape of the desired tooth. The polymer is the same material used in dissolvable sutures, so the scaffold eventually dissolves away leaving a new 'tooth' formed in shape of the scaffold. The claim is that teeth can be grown in the lab then inserted into a patient's mouth or the stem cells can be grown within the mouth reaching a full-sized tooth within a few months. So far, teeth have been regenerated for mice and monkeys, but whether science permits us to put these teeth back into the jaw remains to be seen and at this stage would appear more science fiction than science fact.