Can poor dental health be related to dementia?

Share the blog
Home Blog Can poor dental health be related to dementia?
One thing we all dread about growing older is losing our memories. 'Dementia' is the overall term for various types of cognitive impairment related to aging, including Alzheimer's disease. While there's no known cure at this time, research is underway in many areas of medicine, looking for connections, causes and possible preventative measures. So what do teeth have to do with the health of your brain? You might be surprised… One intriguing factor that seems to be coming up more and more is the link between oral health and dementia. Studies have shown a link between periodontal, or gum disease, and dementia. Could it be that prevention of this tragic disability is as close at hand as your toothbrush? In a study published in 2009 by Columbia University researchers in New York City, over 2,300 men and women were tested for the bacteria that cause periodontitis. This infection can cause gums to become so irritated that they no longer hold the teeth firmly in place, causing wobbly teeth and tooth loss. The study subjects, who were all over age 60, were also given a series of tests challenging their memory functions. 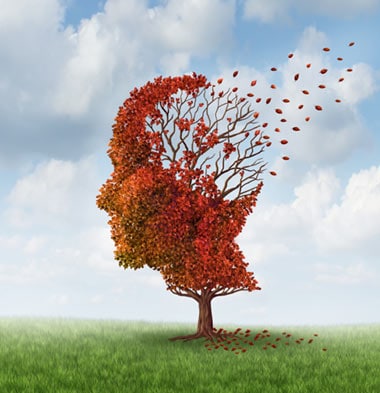 Nearly 20 percent of the subjects had difficulty completing the tests, and those with the poorest dental health had the lowest scores for memory and mental function. For example, one part of the test asked subjects to recall a simple sequence of three words. The higher their level of disease—producing oral bacteria, the poorer the subjects performed on this test. Those with the highest levels of gum disease were three times as likely to have trouble with word recall than those with the healthiest mouths and gums. This group was also twice as likely to fail another test based on simple mental arithmetic calculations.

A Triangle of Diseases

These and other studies are continuing to provide evidence of links between periodontal disease, dementia and cardiovascular disease— which is a leading cause of death among adults worldwide. The common denominator among all of these diseases is inflammation. This is a normal bodily response to injury and is a vital part of our evolution and survival. However, it's when inflammation becomes chronic or 'hidden' deep within the body that things go wrong. Thus, its the presence of inflammation in the gums—periodontal disease—that may be an early indication of later troubles with cognitive function. Studies have shown that people with early periodontal disease, before age 35, have more than four times the chance of developing dementia in later years. Scientists theorize that inflammation, once started in the gums, can 'migrate' or send signals to other parts of the body where it then causes more trouble. If the inflammation spreads to the brain, it shows up as dementia, to the heart, it becomes cardiovascular (heart) disease. A further intriguing link among these 'gang of three' diseases is that studies are showing they all respond positively to nutritional enhancement. Both Folic acid, a type of B vitamin, and Vitamin D have been shown to lessen the occurrence or severity of dementia, periodontal and cardiovascular disease. This is not to say you should go out and empty the pharmacies of their vitamin supply—but if you are concerned about your long-term heart and brain health, it seems like it might be good idea to brush your teeth and take your vitamins!